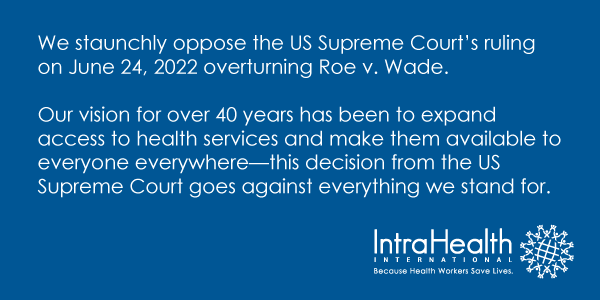 Everyone everywhere deserves access to the health services they need to thrive—including safe abortion. 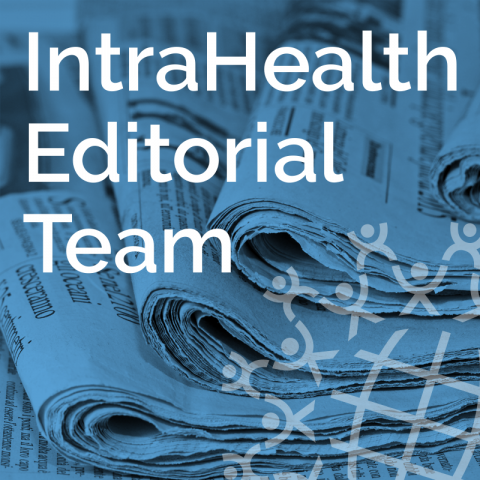 By The Editorial Team
IntraHealth International

The June 24, 2022 US Supreme Court ruling to overturn Roe v. Wade ends the constitutional right to abortion in the United States—a health service that both the United Nations and the World Health Organization have determined to be a human right and an essential part of high-quality health care.

We at IntraHealth International staunchly oppose this ruling. Our vision for over 40 years has been to expand access to health services and make them available to everyone everywhere—this decision from the US Supreme Court goes against everything we stand for.

We know that here in the US, this ruling will make safe abortion services almost—or, in many cases, completely—inaccessible for the pregnant people who need them. And the ruling will come down hardest on communities who have already faced discrimination and barriers to fundamental human rights. Already, around 47,000 people die globally from unsafe abortion and 5 million are hospitalized for serious complications such as bleeding or infection, according to the International Federation of Gynecology and Obstetrics.

We also know that the devastating effects will creep outward. Such a systemic assault on anyone who is or may become pregnant will hinder the progress of global health and gender equity initiatives around the world. This ruling could affect communities in every low- and middle-income country with whom we at IntraHealth partner.

This makes IntraHealth’s work even more urgent. We are determined to keep working.

And finally, we know that this ruling will not reduce the number of abortions in the US or around the world. The Guttmacher Institute has found that countries that restrict abortion access have the highest rates of unintended pregnancy, whereas rates are lowest in countries where abortion is broadly legal. “In countries that restrict abortion,” the institute reports, “the percentage of unintended pregnancies ending in abortion has increased during the past 30 years from 36% in 1990–1994 to 50% in 2015–2019.”

“Decades of research consistently show that abortion bans and restrictions don’t reduce unintended pregnancy or demand for abortion, and they certainly do not help people improve their health,” says Dr. Herminia Palacio, president and CEO of the Guttmacher Institute. “Rather, they impose significant hurdles to obtaining care, causing stress for people in need of abortion and leading some to experience forced pregnancy and all its troubling consequences.”

The way to reduce unintended pregnancy or demand for abortion is through comprehensive sexual education, access to contraception, access to sexual and reproductive health services, and—most importantly—through protecting human rights for everyone everywhere.

“I am heartbroken at this ruling, and at the continued erosion of human rights in our country,” says Polly Dunford, IntraHealth president and CEO. “It makes IntraHealth’s work even more urgent. We are determined to keep working to support health workers around the world and ensuring people everywhere have the human rights and health services they need to live happy, healthy lives.”

Is a Cure for HIV Finally within Reach?