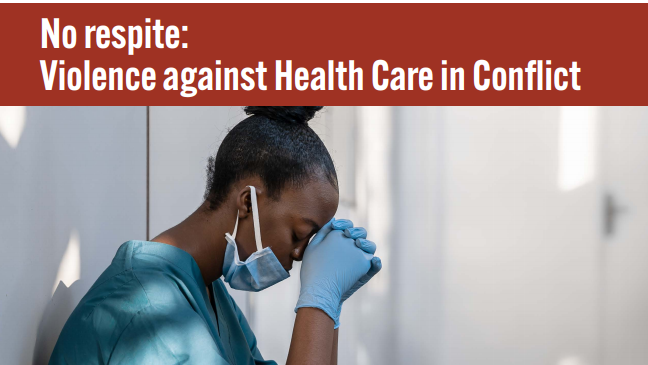 The Safeguarding Health in Conflict Coalition released its eighth annual report on May 24, 2021, documenting the global incidence of attacks and threats against health workers, facilities, and transport around the world. The report cites 806 incidents of violence against or obstruction of health care in 43 countries and territories in ongoing wars and violent conflicts in 2020, ranging from the bombing of hospitals in Yemen to the abduction of doctors in Nigeria. Attacks–including killings, kidnappings, and sexual assaults, as well as destruction and damage of health facilities and transports–compounded the threats to health in every country as health systems struggled to prepare for and respond to the outbreak of the COVID-19 pandemic.

The findings reveal that, on the fifth anniversary of the UN Security Council’s Resolution 2286 on protection of health care in conflict, acts of violence against health care have not been curbed and impunity for those who commit them has remained a constant. In an introduction to the report, Coalition Chair Leonard Rubenstein say, “The reasons for violence are variable and sometimes complex, but the explanation for continuing impunity is not. States have failed to fulfil their commitments to take action–individually or as part of an international effort–to prevent such violence or hold the perpetrators accountable.”

The report, “No Respite: Violence Against Health Care in Conflict,” documents at least 185 health workers killed and 117 kidnapped. Countries sustaining the highest number of attacks included Afghanistan, the Democratic Republic of the Congo (DRC), Libya, the occupied Palestinian territories (oPt), Syria, and Yemen. Although these figures (806) represent a modest decline compared to the overall number of reports identified by the Coalition in 2019 (1,203), the number of killings showed a 25 percent increase, and kidnappings, a 65 percent increase. At the same time, during the COVID-19 pandemic, there were more than 400 acts of violence against health care.

“Violence against health workers has taken many horrific forms: ambulances shot at, hospitals bombed, and even snipers targeting medics,” says Christina Wille, director of Insecurity Insight, who guided the data collection. “The true extent of the violence remains unknown, as many countries, health facilities, and organizations do not report their experiences. Yet we need to remember that each incident is a tragedy in its own right and represents the loss of a family member and a colleague.’

The full 2020 data cited in the report can be accessed via Attacks on Health Care in Countries in Conflict on Insecurity Insight’s page on the Humanitarian Data Exchange (HDX). The data and analyses for 17 countries and territories with the highest numbers of incidents is made available as individual datasets on separate factsheets included in the report.

A related interactive map and report issued by Coalition member Insecurity Insight in March 2021 pinpoints an additional 412 incidents of violence against health, such as attacks on testing facilities and the targeting of health workers directly related to the COVID-19 pandemic.

During the five years since Security Council Resolution 2286 was adopted, people in 14 conflicts have experienced more than 50 reported incidents of violence against health care, eight conflicts have seen more than 100 such incidents, five more than 200, and four more than 300 incidents.

The report notes that states failed to take actions they agreed to in the resolution and were urged by the UN Secretary-General in his recommendations for implementation. They included:

In issuing the report, the Coalition called on the UN Secretary-General to report on the actions and inactions of member states with respect to the commitments made five years ago and recommended the appointment of a special rapporteur or special representative to report on countries and themes as a step toward accountability, to ensure that protection of health in conflict is more than hollow words.

“As if the COVID-19 pandemic and other health threats are not enough, every day, health workers face the risk of violent attack,” says Joe Amon, director of Global Health at Drexel University’s Dornsife School of Public Health, a Coalition partner. “We need an emergency response that targets not a virus but our collective failure to protect workers, facilities, and ambulances and ensure that no matter the context, access to health care, and all health workers, is protected from harm.”

"No patient should worry about safety when seeking care or have to live with fear on top of the vulnerability imposed by illness. Health care providers should never have to put their lives on the line while fulfilling their moral obligations. Violations of the right to safe access to health care cannot continue to be the norm, and violators should be held accountable for these crimes," says Houssam al-Nahhas, a medical doctor from Syria who is Middle East and North Africa researcher at Physicians for Human Rights.

“This report is a clear indictment that the global effort to protect our health care workers on the front lines of care in conflict zones is falling far short," International Council of Nurses CEO Howard Catton says. "The violation of health worker rights is both a health and humanitarian crisis. Our nurses, whether in conflict areas or on the global COVID-19 frontline are particularly at risk of violence. International humanitarian law must not only be respected but applied on the ground to protect nurses and other health workers at the heart of our health systems. The World Health Organization has designated 2021 as the Year of the Health and Care Worker, and the protection of our health workers must be top of the agenda.”

METHODS: The report implemented an event-based approach to documenting attacks on health care and used multiple, cross-checked sources. The information was consolidated into a single dataset of recorded incidents that were coded using standard definitions, which is available on the Humanitarian Data Exchange. The data was compiled and analyzed by Insecurity Insight. Coalition member organizations contributed additional material from their respective areas of focus and research.

The Safeguarding Health in Conflict Coalition (SHCC) is a group of international nongovernmental organizations working to protect health workers, services, and infrastructure.

We're happy to welcome Yidnekachew Tessema to our executive team as the new vice president for human resources!… https://t.co/r2uhuxc60y